Going into my late 20’s I started to notice the hair at the front of my head was thinning, people even started to comment jokingly. It wasn’t clear to me what was happening at first, I thought it could be stress or diet-related.

It did not occur to me at first that I was experiencing the early stages of hair loss. Why would it, I was young and this was something completely new to me.

As I got into my early 30’s my hairline receded to what you can see below, and the problem became clear to me. I would say that this process of thinning and receding took roughly 2 – 3 years.

Here I am age 10, age 24 and at age 27. You may see that I’m receding a little bit and trying to hide it by growing my hair longer.

At this point I tried different medications, starting with natural options and shampoos. I then moved on to more prescription-type drugs and foams, before ultimately deciding to try surgery.

In short, I did not identify the issue and start treating it early enough. Some products do work if you catch the issue in the early stages – however many don’t really do anything.

Here I am at age 28 and age 30. I got fed up growing my hair and thought it might look better if it was shorter.

I went through years of trial and error with different products and by the time I found what the correct ones were it was too late to get the benefits of them.

Here I am at age 33. This is the point I decided to go for the hair transplant. 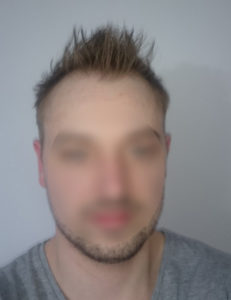 In total, I spent about 5 – 6 years losing hair and then trying different products to regain it. Also during this time I tried accepting it, which was hard. I also tried shaving my head, which I felt did not suit me at all. And I also tried different hairstyles, mostly really short ones to make the best of it.

What I found was that people would say ‘it doesn’t look that bad’, or similar comments. I know this comes from a place of wanting to help, but it’s kind of a slap in the face and does nothing to make you feel better.

I would reply: if you could look like anyone you wanted, would your description be someone who ‘doesn’t look that bad’, or someone who ‘looks ok from over here’? Probably not right. 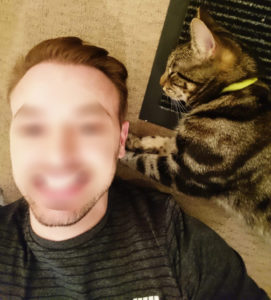 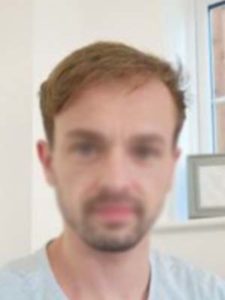 It’s estimated that 60% of men will experience some form of hair loss by age 35. And for an estimated 25% of men this starts around the age of 21 on average.

It’s important to say that if you are experiencing hair loss this is completely normal and you shouldn’t feel too bad about this. For some people, a small amount is totally expected and hardly noticeable by others, and completely natural as you mature.

For others it actually suits them. I have a friend who started to lose his hair around age 18 and by 21 was completely bald on top. He shaves his head and looks really good for it.

And just look at Jason Statham – it’s not slowed him down!

I’m convinced that for every hair he’s lost he’s gained new muscle or added another million to his bank balance. Jokes aside I guarantee if you ask anyone experiencing a negative change in their physical appearance to comment honestly, most would say they wish they could change it.

This is why after much research and trial and error with different products I chose to have an FUE hair transplant.