Can You Get A Hair Transplant Without Taking Finasteride?

Can You Get A Hair Transplant Without Taking Finasteride? 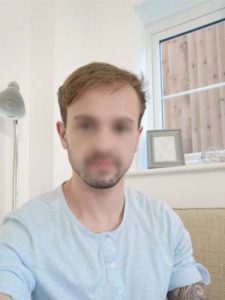 Hi, I'm John. About age 30 my hair started receding. After trying lots of products I eventually decided on a hair transplant. And now I have my hair back.

After a hair transplant, do you want a better chance of regrowth? We look at Finasteride, which effectively prevents hair loss, with some fascinating studies showing exceptional results.

You don’t have to take Finasteride or Propecia before having a hair transplant. Finasteride and Propecia are both effective at supporting hair growth but not a prerequisite for surgery.

Finasteride is a drug that supports the growth of normal hair in men. It is a hormone-based drug that is only available on prescription at the moment.

Most people who live with hair loss know that their hair thins and falls. This is due to a hormone called dihydrotestosterone or commonly known as DHT.

DHT is generated from testosterone and converts in the skin, which is what makes your hair fall out. In men and women, this is the leading cause of hair loss.

How Safe Is Finasteride?

It’s not a new drug, and his history in prostate cancer patients shows promising results.

It has been prescribed by 20,000 doctors worldwide for hair loss and maintenance, and I consider it a safe drug to use. They use the drug themselves and prescribe it to family members.

Can You Get A Hair Transplant Without Propecia?

The simple answer to this question is yes, but why would you want to if you know that Propecia will support new hair growth?

Propecia is the same drug as its generic brother finasteride. It is the only widely available medication to prevent hair loss and focuses on the root causes of male pattern baldness.

Like its generic relative, it targets DHT or the prevention of DHT being produced from testosterone.

Hair Transplant surgeons prescribe Propecia before and after hair transplant surgery to give the best results and the chance of survival to the newly implanted hair follicles.

Propecia has few side effects and is considered to be highly safe to use.

If you object to taking Propecia, the surgeon will discuss your options for a successful outcome of hair regrowth.

But the answer to the question is yes. You can proceed with a hair transplant and expect a good outcome if you adhere to the postoperative care guideline.

Is Propicia and Finasteride Effective?

Studies show that Finasteride and Propecia (the same drug) to be very effective, with hair loss decreasing in 88% of men who have been prescribed the drug.

Interestingly, Finasteride encourages hair regrowth, with the studies reporting that 66 % of all men taking the drug experienced some hair regrowth as DHT was blocked.

In terms of maintenance and the prevention of hair loss, Finasteride proved to be highly effective.

What Happens If I Stop Taking Finasteride?

The results speak for themselves. If you stop taking this drug, then you will resume your hair loss. It takes a little time for the drug to leave your system altogether and be metabolised, but you will experience hair fall again once out of the system.

Finasteride was studied for five years and is possibly the most important study of a preventative hair loss drug ever undertaken.

The study was double-blinded to attain accurate results, placebo-controlled and combined 1,553 men.

To evaluate the drug, the study used hair counts, and before and after photos for the investigator assessment, also self-evaluation was used to conduct the study.

Side Effects Of Finasteride

The Finasteride Study showed that a percentage of the men had less libido or sexual drive. This is across a range of ages where men could be considered to be most virile.

The report of not being able to get an erection or maintain an erection has a particular concern in the group of men tested.

For some phantom reason, the same had been reported in men from the placebo group!

After ceasing to take the drug, the side effects vanished.

These side effects should be considered carefully before taking Finasteride or Propecia. For men in a new relationship or starting a family, this drug could have serious consequences.

Some other side effects include cold sweats and chills. Confusion when trying to complete tasks and dizziness.

Allergic reactions have formed part of the extensive list of side effects of this drug.

If you are taking this drug or any other drug and you experience side effects like these, you must seek medical help without delay.

A further study into prostate cancer was conducted with this drug over seven years.

Finasteride is prescribed in higher doses to prevent prostate cancer, typically 5mg in comparison to 1mg for the prevention of hair loss.

The term Nocebo effect has come about from clinical trials and is a phenomenon that occurs when a patient expects negative results and side effects from the drug or placebo.

If you tell a group of men in a drug study, there is evidence that specific side effects can occur, such as erectile dysfunction.

A study group reported on by a well known New York paper that the men administered with Finasteride could experience erectile dysfunction. The other group was told nothing, and it was simply a drug trial.

The group informed about the potential for erectile problems developed the side effects at an alarming 445 Of the men. While only 2% of the other group experienced erectile dysfunction.

Don’t get caught in the Nocebo effect!

Should You Take Finasteride For Hair Transplant Surgery?

If you want to achieve the best results from the surgery, it’s a no brainer to take the drug.

Taking the drug will provide you with the best possible outcome for a hair transplant, and for sure, your doctor or surgeon will recommend its use whatever drug name he may choose.

Many factors hamper the progress of your hair transplant, and to have a drug that will remove some of the doubts from your mind as to the successful outcome; then it must be worth taking the drug.

Should you take the drug long term and live with the side effects? For the short term success of what you wish to achieve, then the answer must be yes. However, ultimately the decision will be yours.

Top 5 Reasons to go abroad for a Hair Transplant

A hair transplant in Europe is at least 60% cheaper than in the UK. And most packages are all inclusive, including your accommodation and airport transfers.

2. Europe has some of the most experienced surgeons in the world

Europe has more clinics, which have been established and running for much longer than clinics in the UK. The price is also lower, making it more accessible for people.

Surgeons in Europe will have carried out hundreds, if not thousands more procedures than UK based surgeons. Because of this some UK clinics will bring in surgeons from Europe to carry out your procedure.

3. Hair restoration clinics in Europe are state or the art

Hair restoration is only now becoming more popular in the UK, so many UK clinics are general cosmetic facilities that carry out various procedures.

4. Get even more value by making your transplant into a holiday

Europe is such a popular holiday destination for many reasons, the culture, history, sights, cuisine, shopping, great weather, your money goes further, it’s widely English speaking, and it’s just 2 or 3 hours away by plane.

The list goes on! So why not travel a few days earlier, grab a low cost Airbnb or hotel, take a friend or partner and enjoy the city for a few days before your transplant.

It’s so easy to get an assessment and price. Contact the clinic, arrange an initial consultation in the UK with your surgeon, or do an online consultation by sending a few pictures and answering some basic questions.

Once you’re happy, pick a date and you’re done! The clinic will send you all the paperwork and itinerary so you know exactly what’s happening. You don’t pay until you go for treatment.

You just hop on the plane. A transfer car will meet you as you get off the plane and take you to the clinic. It’s such an easy process. Easy!

You can get a haircut after the first month, or you can keep it short yourself with clippers until it starts to grow back.

2. Pick the right time to schedule your treatment

Good clinics will be busy, so you may have to wait 2 months to get an appointment – this is a good thing. So knowing that and knowing your post-op timeline (above) means you can plan the perfect time around your social or work calendar.

If you have important social events coming up, particularly if you know you’ll be photographed then you may plan your transplant 6 months in advance, or wait until your calendar is free.

If your hair has receded at the front you’ll want the clinic to draw an expected hairline on your head or on pictures of you as soon as possible. They’ll then also talk about the number of grafts or hairs you’ll need and how thick the result will look.

The sooner you can establish this, the sooner you’ll know exactly what to expect. A good clinic will also take into consideration a natural looking hair line for your age and your face and head shape. Have an honest conversation and be open to their expert feedback.

There’s no way around it, you’ll have to go out in public to travel home. The worst part is sitting at the airport for 2 hours or so whilst you wait for your plane.

I found it was best to embrace it. People are nice for the most part and won’t stare, and if one or two do who cares – you will never see those people again! You may even be at the airport with other transplant patients, I wasn’t the only one!

Take a travel pillow and have someone pick you up if possible, so you can exit swiftly and get back home as soon as possible. It’s natural to be self-conscious, but it’s over fast and well worth it.

Tip! Just take carry-on luggage to keep your check-in and wait time down.

Hi, I'm John. About age 30 my hair started receding. After trying lots of products I eventually decided on a hair transplant. And now I have my hair back.

A Simple Way To Keep Hair Healthy And Thick 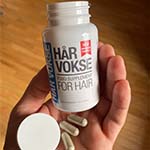 Do you want to keep your hair without surgery? I get it … surgery can be expensive and frightening. Although it’s the most effective solution when things go bad and it helped me, you still experience some discomfort and have to take some time off from work.

Fortunately, researchers in Norway succeeded in stopping hair loss and promoting regrowth in 63.9% of test participants by using fish proteins!

Although not flawless … fish proteins, minerals, and antioxidants have a positive effect on strengthening hair.

Click here to get a 60 day money back guarantee.

Enquire About A Hair Transplant 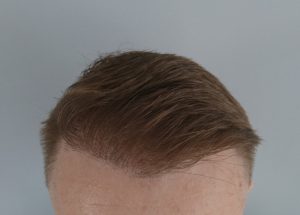 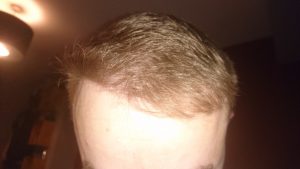 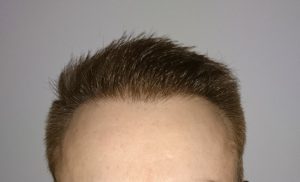 I have had my fourth check-in with the clinic today.... 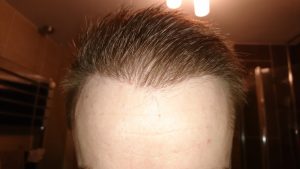 At this point, I would say that my hairline has... 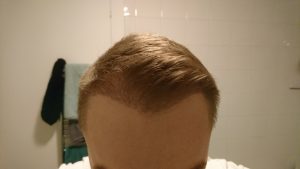 The last few weeks have been amazing! I’ve gone from... 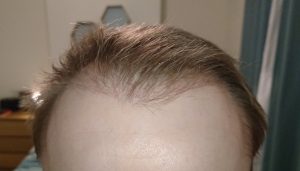 It’s time for my third check-in with the clinic. I’ve... 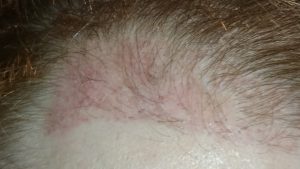 I won’t lie it’s been hard these last few weeks.... 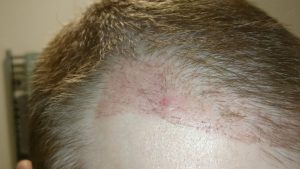 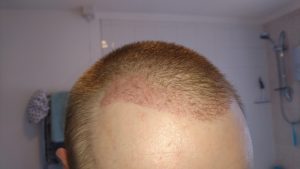 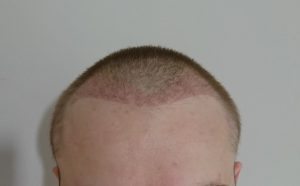 It’s time for my second check-in with the clinic. I... 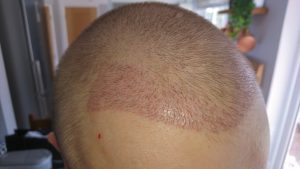 Today is my first check-in with the clinic after my... 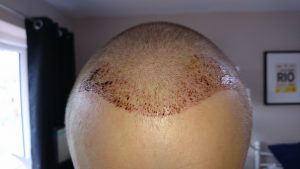 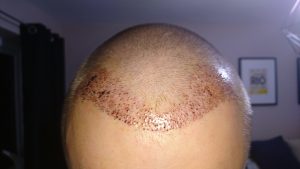 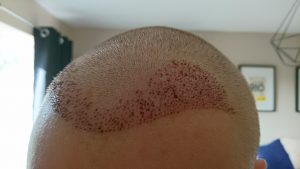 I slept a little more flat last night and didn’t... 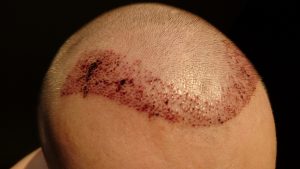 I slept in my own bed last night and I... 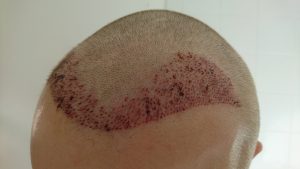 I slept really well last night. I didn’t have any... 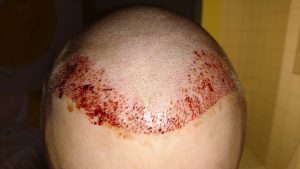 I’ve just arrived back at the hotel after my FUE...